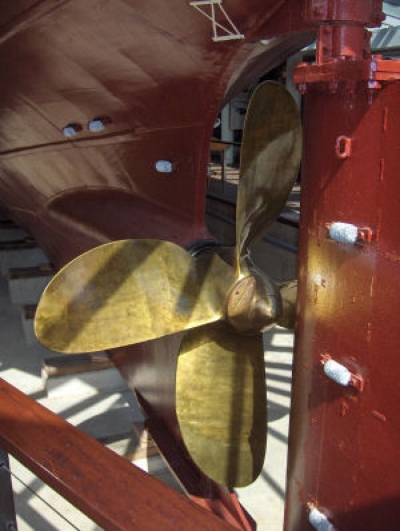 On the tablet on the wall of the Inland Towage Hall of the National Dutch Towage Museum the visitor will find a clear explanation about the various types of ship propellers. The author of this information is mr. H. Hensen.

Three characteristics are relevant for the function of a conventional ship's propeller: the shape of the blades, the number of blades and the position of the blades. A tugboat uses a different propeller model than for example a cruiseship or a tanker.

It is clearly visible whether a screw is adjustable or on the contrary has fixed blades. An adjustable screw has a thick hub, and the controllable pitch blades are mounted on the hub with bolts. A fixed screw is cast in one block and normally made of a copper alloy.

The distance the screw travels in one rotation, is called speed and depends on the pitch of the blades. Water is liquid, so some loss will occur. This is called slip.

Propellers often rotate in a shaft, a so called nozzle. This provision has initially been developed to reduce damage to slopes, campshots and suchlike on canals and rivers. But soon it appeared that a nozzle had a positive influence on the effectivity of the screw; the ship speeded up. Ever since the nozzle has been applied on a lot of ships. Dependent on the requirements of the craft, different types of nozzles have been developed. The name Kort nozzle is often used, after the inventor's name.

There are also totally different propulsion systems. We mention the Voith Schneider propeller and the JET propulsion. Moreover, many ships nowadays like cruise ships and tugboats make use of so called azipods.

All this has been made visible on the wall tablet in the museum.