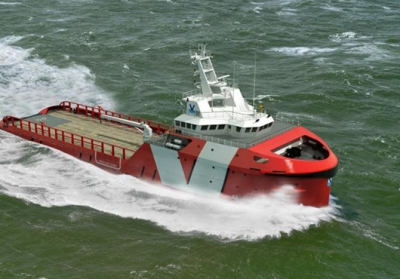 First Vroon AHTS launched at Fujian Construction of a series of six anchor handling tug supply (AHTS) vessels for Vroon is currently underway at Fujian Southeast Shipyard (FSES) in Fuzhou, China. The first of the vessels, VOS CHALLENGE, was launched in early December. The keel laying ceremony for VOS CHANCE, number three in the series, took place on 30 November 2015.The vessels are based on designs developed by Vroon, reflecting client specifications, market requirements and their inhouse offshore experience. The 65m vessels incorporate 425m2 clear deck space and what Vroon describes as 'hotel-type' accommodation for 39 crew and clients. They are SPS Coded and equipped with FiFi 1, DP2, class-leading anchor handling and towing winch (1,500m x 64mm) and 85 tonnes bollard pull. In addition, they have two 10 tonne super silent bow tunnel thrusters and one 8 tonne stern thruster for greater manoeuvrability. The vessels are fuel
efficient and comply with all latest safety requirements.VOS Challenge is scheduled for delivery to the company in spring 2016, with its sister vessels following later in the year. All six vessels will operate in Southeast Asia.

Vroon, a Dutch shipping company, has announced through social media that the steel-cutting ceremony of NB Hull No. DN65M-V-1 took place at Fujian Southeast Shipyard yesterday morning.
The vessel, a 65 metres anchor-handling tug supply (AHTS) vessel, is scheduled for delivery to Vroon Offshore Services in 2015.
The AHTS will have a length overall of 65m, its deadweight will be 1700 tonnes, and will be capable of accommodating 39 people.
Vroon Offshore operates worldwide and has a fleet of around 160 vessels transporting dry cargo, containers and clean and dirty oil products, as well as a large fleet of offshore-support vessels.