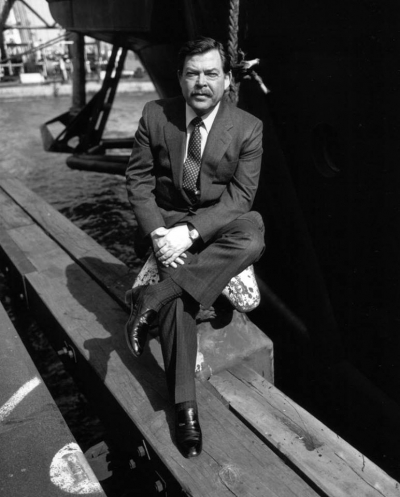 On Tuesday 9th February we received the message that Mr. R.W. (Rom) Scheffer passed away at the age of 85 years. During the sixties, seventies and eighties of last century Mr. Scheffer was a remarkable personality in the world of shipping. After his training to become an officer on board of ships, he sailed for some two years on freighters and passenger ships, i.e. for Van Nievelt Goudriaan and for KJCPL on Tjisadane.
Soon, it struck his masters that Rom Scheffer had quite some commercial qualities. At the age of 22 Mr. Scheffer decided to work ashore. He accepted jobs for foreign companies in South-Korea, the U.S., Hong Kong, Kuala Lumpur and Singapore. A.o. he chartered ships for a mining company that exported ore from Malaysia to Japan. When the mines were more or less exhausted and mergers took place, he was looking for a new challenge.
His reputation was already well-known and he was recommended to Mr. A. Lels, the man who, at that time one of the directors of L. Smit & Co, laid a plan on the table to establish a shipping company for supplying drilling platforms in the North Sea. In 1964 at the age of 33 Mr. Scheffer became the first employee and the first director of Smit-Lloyd, the company that Mr. Lels had in mind. 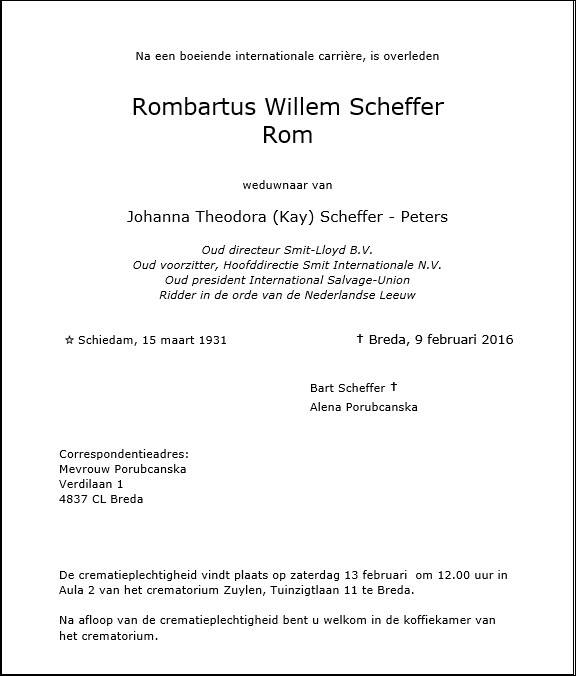 Thanks to the energetic approach of Rom Scheffer the company became a renowned firm in the offshore world and oil-industry. Oil-production at sea was still in its infancy and Mr. Scheffer was a pioneer as far as supplying drilling platforms were concerned. The original plan was to have seven suppliers built, however for each ship there was already a contract concluded before even being commissioned. After only some years dozens of Smit-Lloyd suppliers were sailing the oceans. Subsidiaries were established in a.o. Australia, Greece and the U.S.
In 1976 some of the subsidiaries of L. Smit & Co's Internationale Sleepdienst, among which Smit-Lloyd merged. Still the Smit-Lloyd vessels kept on sailing under their own wellknown colours for quite some time. One year after the merge Rom Scheffer was asked to accept the job of CEO of Smit International as a whole. Although his heart was still with Smit-Lloyd he accepted this difficult task. For ten years he was the leading personality of this world wide well-known towage and offshore company. During that period of time he encountered many problems. Both the markets for towage as well as offshore activities decreased. Yet, thanks to his inventive, however difficult decisions Smit International survived.
By 1987 Mr. Scheffer had to decide to step down. His health caused him too much troubles and he was right when he stated: You can't do this job in a more quiet atmosphere. 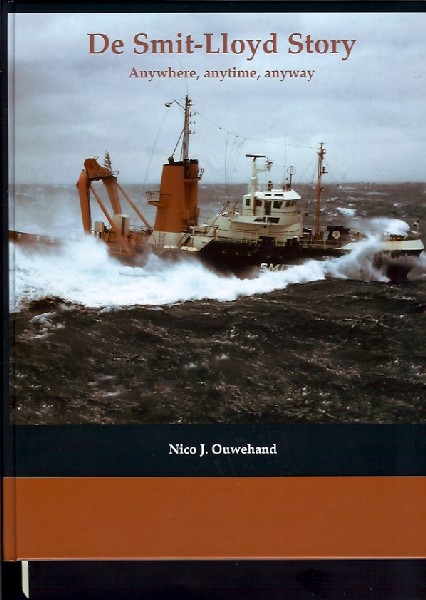 Still after 1987 the maritime markets were facing difficult times. As a consequence in 1996 Smit-Lloyd was sold to the American Seacor company. That's certainly a fact that hurted Mr. Rom Scheffer. Although retired Mr. Scheffer kept on following the weal and woe of Smit International, the towage market as well as the situation in the offshore industry.
In 2006 he persuaded me to write the history of 'his' company, viz. the book "The Smit-Lloyd Story". An outstanding man in the maritime world passed away. He leaves his marks in the offshore history.