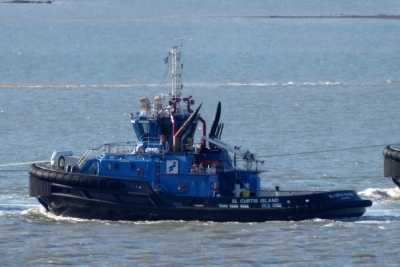 The champagne flowed freely as Smit Lamnalco celebrated the naming and blessing of the latest additions to its fleet of tug boats. The Smit Lamnalco tugs for the LNG Gladstone project were christening on the 23rd March 2016. The vessels are named SL Curtis Island; SL Quoin Island, SL Boyne Island; SL Heron Island and SL Wiggins Island. The five tugs are built by Sanmar Turkey. The tugboats will service three LNG export terminals in the Port of Gladstone on Australia's east coast. This Robert Allan RAster 3400 series are Bureau Veritas-classed tugs, and are 34 metres long, 14.5 metres wide, have a maximum draft of six metres and have FiFi 1 notation. Powered by a pair of Wärtsilä 8L26 diesel engines, each developing 2,720 kW at 1,000 rpm, the tugs have a bollard pull ahead of 86 tonnes, astern of 80 tonnes and a free-running speed of 15 knots.