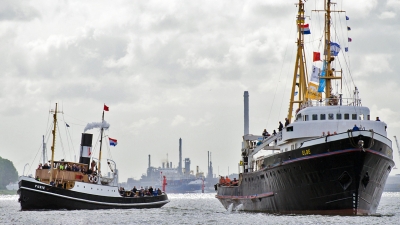 Saturday, 21th May 2016, the traditional sailing day in Maassluis took place, as every two years by the end of May. The event had been organized by the Towage harbour Maassluis Foundation (Stichting Sleepboothaven Maassluis). ‘Sailing day’ means that any person interested in towage can buy a ticket to do a harbourtrip in the neighbourhood of Maassluis on one of the museumtugs and salvagevessels that usually can be found in our local port, viz. Furie (1916), Elbe (1959) and the salvagevessel Bruinvisch (1937). Also proudly sailing were the small tug Maassluis (1948) as well as Adriaan (1957). Hudson (1938), this time in the outer harbour, was open for visitors. Most welcome guests were Albatros (1959 –ex Bugsier 24) and Baloe (2006 – Herman Sr. B.V.) which performed two great demonstrations. Also Thamesbank, Texelbank and SD Jacoba showed their impressive possibilities. During the festivities Joli L of Landfall passed Maassluis on her way to sea. Mind that Albatros, in the past owned by Jan Kooren Towage,  has now homeport London on her stern. It’s the intention of the foundation to organize next year again a ‘Day of the seagoing Towage Industry’ (Dag van de Zeesleepvaart) during which tugs and suppliers of any owner (also from  foreign countries that happen to be in the Rijnmond region) will be welcome.
(Source: Nico Ouwehand, taken from Tugs, Towing and Offshore Newsletter)