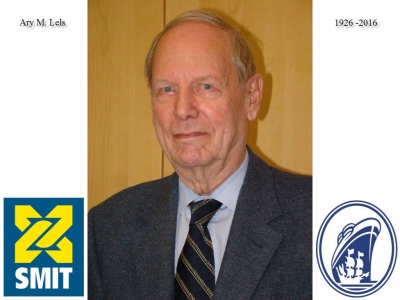 While being on holiday I received the sad message that Mr. Ary M. Lels passed away at the age of 90 years.  A couple of years ago in several maritime magazines I had the honour of publicing articles about the life and visions of Mr. Lels. On several occasions I met him, although it was long after his active career as a director of L. Smit & Co’s Internationale Sleepdienst and later on of the Holland America Line. After his retirement he kept on following the developments in every field of the maritime market. He started his career as a trainee for L. Smit & Co at Rotterdam. One of his first jobs was to assist the management of the company during the clearance of the Suez Canal in 1956/57. Mind, in those years he was only 30 years of age. On board of the tug Noordzee of Smit he had a long conversation with the captain on the upcoming oil-industry in the Persian and Mexican Gulf. He realized that no doubt  oilcompanies would be interested in the oil and gas stocks under the North Sea, that were still in the process of being discovered. When he visited the Mexican Gulf region some months later, he noticed that the first suppliers for drilling platforms were active there, however these ships were not suitable at all for the sometimes rough weather in the North Sea.  He presented his ideas for a company with Dutch suppliers to the management of Smit and of the Rotterdam Lloyd. They were prepared to finance the first Smit-Lloyd suppliers. As we all know the developments went fast and SmitLloyd  became an tremendous success. A second  idea of Mr. Lels was establishing a company for heavy transport at sea. His friend mr. B.van der Laan already started such a business on a modest scale. As the management of Smit was not ready at that time to explore the possibilities of the new ideas of Mr. Lels, he turned to the Holland America Line  and found ways to establish together with business partners Big Lift in 1972.  The life and the ideas of Mr. Lels has been extensively written by himself in his recent book  “Man van de waterkant” of which I received a copy from him personally in the National Towage Museum at Maassluis just a few weeks ago. Mr. Lels had a warm heart for the museum and other institutions for maritime history. It’s a  great loss  for the maritime world  that Mr. Lels has passed away.
Nico J.Ouwehand (National Dutch Towage Museum, Maassluis, Holland)