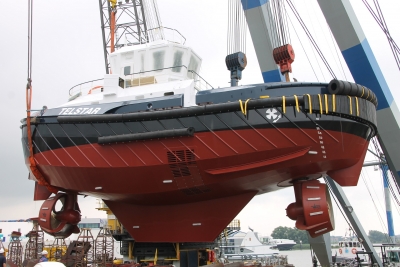 On Thursday 18th August 2016 the new building Eddy design 24/75 tug TELSTAR from the Holland Shipyard was seen passing underway to the Rotterdam Europort for her technical trails, speed and bollard pull tests. The tug named TELSTAR was built for Iskes Towage and Salvage. The TELSTAR is named after a local soccer club in IJmuiden. The TELSTAR has 2 thrusters. It is remarkable that both thrusters are mounted in alignment under the fuselage - one under the prow and one under the stern. As a result, the Telstar has extensive maneuvering options. Another unique feature of the Telstar is that it is a hybrid tugboat. A combination of diesel direct and diesel electric propulsion ensures that it will consume less fuel. This also contributes to reduced CO2 emissions. On Saturday 30 July 2016 yard number 2015-27 from Holland Shipyard at Hardinxveld-Giessendam was launched by the sheerleg MATADOR. 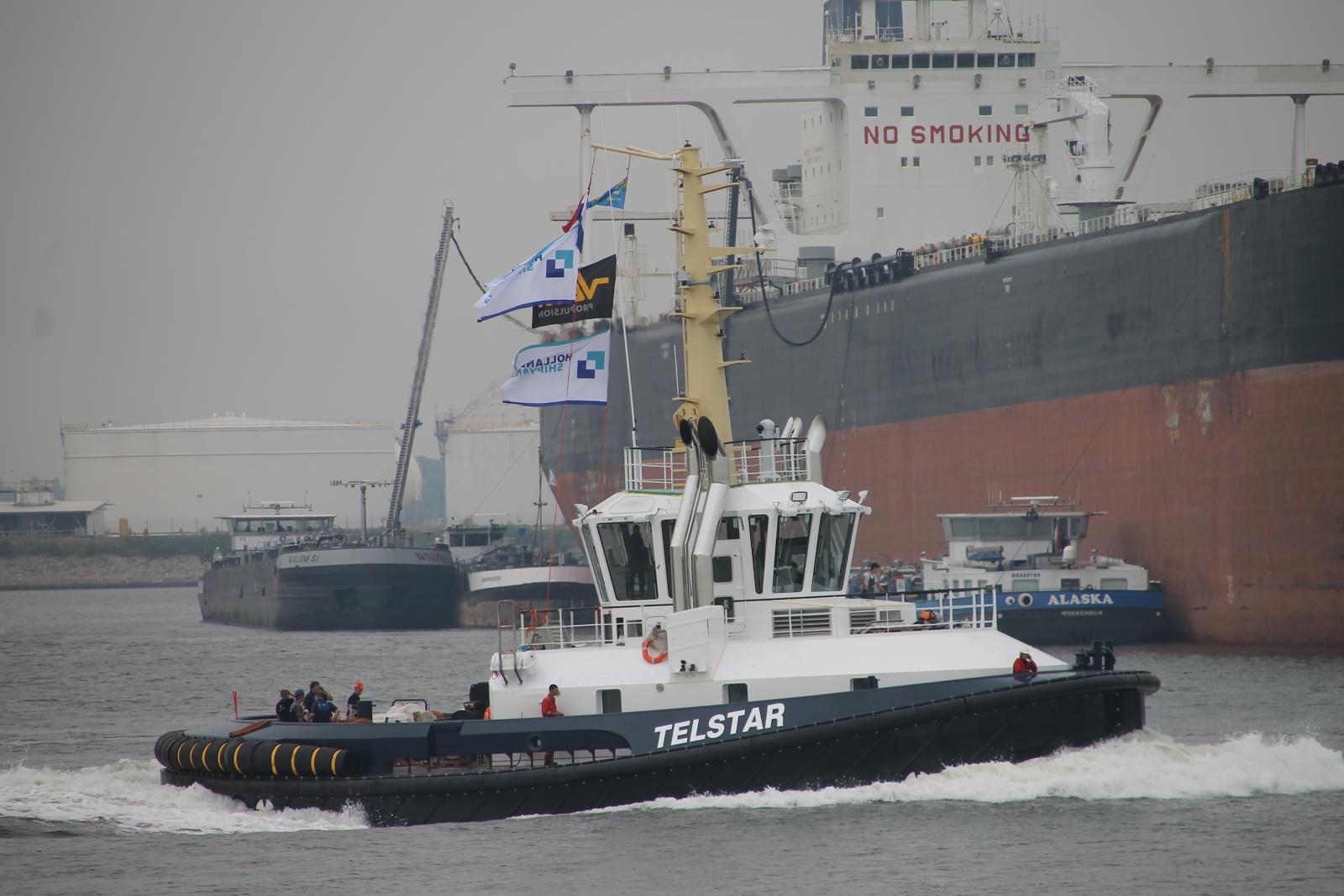 The Eddy 24-75 Hybrid Harbour Tug designed tug TELSTAR (Imo 9796066) is the smaller type of the Eddy-1 (Efficient Dynamic Double Ended). It is expected that the tug reached a bollard pull of 75 tons developed by two Mitsubishi main engines S16R2 with 1450 kW each and two permanent magnet electric drives. Veth Propulsion supplied the two VZ 1800 thrusters with 2,350 kW each, two Scania DI16-090M generators with 640 kW each and a SiSu 49 CTAG with 89 kW as harbour set. The Eddy design is a new concept with a slender hull form and thrusters in the centre for high stability and fuel efficiency. She has a length o.a. of 25.45 mtrs a length lpp of 23.57 mtrs a beam of o.a. of 12.20 mtrs a moulded beam of 11.40 mtrs and an operational draught of approx.. 5.05 mtrs. Her maximum free sailing speed will be 12.5 knots and 9.5 knots in the Hybrid mode. The vessel is classed BV1 +Hull, +Mach, AUT-UMS. She is the second vessel of this Eddy type built by the Holland Shipyard. In the next months the tug will be outfitted by the yard.
(source: Towingline. Photos: Arie Boer)