STEENBANK prepared for towing to her hometown Maassluis 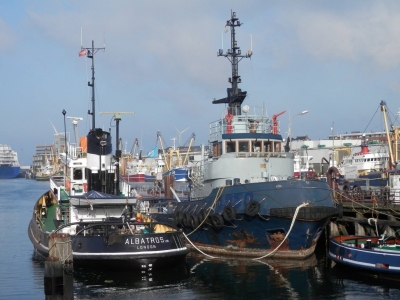 The tug Steenbank this week recounted the demolition yard Treffers in Haarlem to the Jetty of Iskes in IJmuiden where the ship will be made ready for the transport to Maassluis. The first Europoort tug with an installed engine power of 1,250 HP will be renovated in its former repair/maintenance port Maassluis and completely restored to its original NRS (Nieuwe Rotterdamse Sleepdienst) colors. The name NRS comes back again as the owner of the ship has chosen the initials in a name. To know Nostalgic Rotterdam Tugs. The tug was built in 1960 by Scheepswerf v/h H.H. Bodewes – Millingen; Netherlands under number 560 and delivered to L. Smit & Co's Internationale Sleepdienst Mij NV – Rotterdam. In 1961 chartered to NRS - Nieuwe Rotterdamse Sleepdienst – Rotterdam. In 1972 transferred to Smit Internationale Havensleepdiensten BV - Rotterdam and renamed Astroloog. In 1980 sold to the Belgium Navy – Oostende and renamed Valcke (pennant A 950). In 1985  damaged in a collision with UK ferry European Enterprise off Zeebrugge. In 1994 laid up. In 1996 refit and back in service. She has a length of 30.38 mtrs a beam of 7.55 mtrs and a depth of 3.81 mtrs. The twp Deutz diesel engine have a total output of 912 kW (1,250 bhp) with a free sailing speed of 11 knots and a bollard pull of 13 tons.