Royal Boskalis Westminster has published a book about the salvage of the Ever Given. 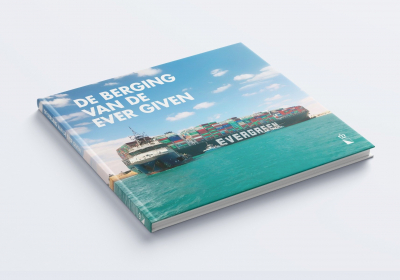 In March this year, Boskalis was at the center of worldwide media attention on the salvage of the stranded mega container ship Ever Given in the Suez Canal.

In collaboration with the Suez Canal Authority, a large group of experts from Boskalis and its subsidiary SMIT Salvage succeeded in refloating the enormous vessel within a week during a spring tide and unblock the canal.

This allowed the hundreds of queuing ships to continue their journey and averted a potential disaster for world trade (Lloyd’s List estimated the damage at USD 400 million per hour).

“In response to these requests and because of the unique nature of this salvage operation, we decided to publish a book reporting on this intense week,” said Boskalis.

Based on interviews with a large number of colleagues involved, combined with various photos, the book paints a chronological picture of what took place on board the stranded vessel with the salvage team, the shore support team in Egypt and the Boskalis offices.

The book has been published in Dutch and English, and can be ordered in the Boskalis shop (shop.boskalis.com) or at Bol-com. The price: EUR 9.95, postage free in The Netherlands.

Boskalis announces the successful salvage operation of the grounded 20,000 TEU container vessel Ever Given in the Suez Canal. With a length of 400 meters and a width of nearly 60 meters this giant ship had been wedged in this vital shipping route since 23 March 2021 blocking all shipping traffic ever since.

Peter Berdowski, CEO Boskalis: “Shortly following the grounding of the Ever Given we were requested through SMIT Salvage to provide assistance with the salvage operation. I am excited to announce that our team of experts, working in close collaboration with the Suez Canal Authority, successfully refloated the Ever Given on 29 March at 15:05 hrs local time, thereby making free passage through the Suez Canal possible again. I’m extremely proud of the outstanding job done by the team on site as well as the many SMIT Salvage and Boskalis colleagues back home to complete this challenging operation under the watchful eye of the world. The time pressure to complete this operation was evident and unprecedented and the result is a true display of our unique capabilities as a dredging and marine services provider.”

For the refloating of the 224,000-ton container vessel approximately 30,000 cubic meters of sand was dredged to help free the vessel and a total of eleven harbor tugs and two powerful seagoing tugs (Alp Guard and Carlo Magna) were deployed. The vessel is towed to a location outside the channel for further inspection.